Her winning weekend began in qualifying Friday night, when Force and her Advance Auto Parts team set the Top Fuel national speed record after running 338.17 mph in the second session. She now owns both ends (ET and MPH) of the national record in Top Fuel.

Force’s Friday qualifying pass reset the Vegas track record for ET at 3.659, positioning her as the provisional No. 1 position. She also earned bonus qualifying points as the quickest ET of session Q2, and 2nd quickest in sessions Q1 & Q4.

However, her provisional pole would not stand, as Leah Pritchett would reset the track record again in the final session, just five-thousandths of a second quicker with a 3.654. Brittany Force would enter eliminations in the No. 2 position.

Beginning eliminations, Brittany Force opened race day with a commanding win against Pat Dakin, who lost traction early for only a 7.786-second pass against Force’s 3.689-second pass at 333.16 mph.

This would pair her against No. 10 qualified teammate Austin Prock for Round 2 eliminations. He held a 3-0 record against her in prior meetings. Prock would take the advantage at the starting line, but Force would reel him back in with a 3.709-second pass at 330.72 mph to his 3.732 at 331.69. The race was a close one, with the margin of victory at the finish just 13 inches or 0.0022 seconds.

The semifinals would prove to be the most pivotal overall in championship standings. All of the top 4 contenders remained – so the outcome of the semi final match ups would have big point implications. Brittany would watch Doug Kalitta, who sat ahead of her in the No. 2 points position, fall to the current points leader Steve Torrence.

She would then take lane choice against Steve’s dad Billy Torrence, the No. 4 in points. Brittany knew that a loss here could allow the father and son pair to take the top points positions entering the final race of the countdown.

With the pressure on, Force needed the Vegas win to move her ahead in the standings. Leaving the tree first, she stayed out front to beat Billy Torrence on a holeshot thanks to her .063-second reaction time on the tree and a 3.714-second pass at 329.99 mph. Torrence would run 3.710 at 332.10 with a .087 reaction time.

This meant Brittany was facing off with the reigning world champion and points leader, Steve Torrence, in the final round. Force and the Advance Auto Parts team would reclaim the Vegas track ET record, laying down the quickest pass of the event at 3.652-seconds, 334.73 mph to defeat Torrence’s 3.719 at 330.63.

“Las Vegas is a home track for me. I grew up out here racing super comp and A-fuel. I’ve always wanted to win here. This weekend has just been incredible for this Advance Auto Parts team. We have the record with mph, a 338. It’s incredible to hold that with the Advance Auto Parts boys. And we set the ET this year too. We’ve accomplished a lot but really what we’re going after is a championship together.”

The win would mark the 10th career victory for Brittany Force, her first at The Strip at Las Vegas Motor Speedway (she finished as runner up in 2017) and the second victory of the season.

Winning Vegas moves the Advance Auto Parts team up to the No. 2 spot in the Mello Yello points standings. With just one race remaining in the countdown, Force trails leader Steve Torrence by just sixteen points.

“It’s a Vegas win, it’s a win in the Countdown which is huge and it moved this Advance Auto Parts team that much closer to the No. 1 spot so, this is a big win for our team. Like I said, it’s been since Houston since we’ve won so we’ve been out of the game for a little while but we’re turning a corner at the right time,” Force said. “We have Vegas and then we go right to Pomona. There’s one left and our minds are in the right place now.”

Female Double up Win in Vegas

Brittany shared the podium this weekend with Pro Stock’s Erica Enders as well. Just moments before Force crossed the finish line, Enders took the Pro Stock win in Vegas, making her the 150th female win in the history of the sport. Brittany Force’s Vegas win made the 151st win for women in the NHRA.

“I always cheer the ladies on. There’s only a few of us out here and you know, Erica Enders, what she’s done for this sport, with two championships, I’ve always looked up to her. She’s incredible. She started in Jr. Dragsters. I remember watching her movie when it came out on Disney. Courtney and I would watch that thing over and over to get us pumped up before we’d go race in Super Comp, so to share the winner’s circle with her this weekend is pretty awesome. She’s a great friend, she’s an incredible driver and pretty cool that we did 150 and 151 today.”

Melanie Salemi to debut new ride
Next Post: Daring to be Different with Porsche 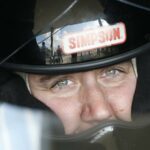