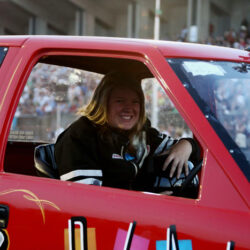 In the Clutch with Tinzy Aronson
Next Post: Megan Meyer 4-Wide Nationals